Jim currently serves as President of Richmond Elevator, which was established in 1990. Jim began his career in the elevator industry in 1971 with Mainco Elevator. He joined the ECNY board in 2000 as Secretary to fulfill a vacancy and then sat as Secretary until 2003. Jim has been involved with the following Committees, ECNY Technical Presentations 2001-2003, DOB Elevator Advisory Committee 2001-2003, DOB Elevator Code Committee 2003 – Present, ECNY DOB Committee 2004- Present, ECNY Web site Committee 2004-Present. Jim is an Electrical Engineer and Licensed NYC Private Elevator Inspector Director, Qualified Elevator Inspector QEI. Is a member of ASME A17 Sidewalk and Hand Elevator Committee ASME and a member of NEW YORK CITY CODE REVISION, Elevators & conveyors Technical Committee. He is part time member of the faculty of the College of Staten Island Engineering Science Program 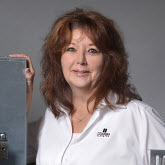 Grace started in the elevator industry in 1984 as a dispatcher for an OEM and quickly moved into positions of service sales, new equipment sales, and senior level management throughout her career.   Grace joined the supplier side of the business in 2010.  Grace is currently the Director of Business Development and Marketing for Columbia Elevator Products Co., Inc. .  She currently sits on NAEC Safety Committee, is Co-Director of the Educational Program for the VIEEW, and has served as NAEC Membership Chairperson.  Grace was elected to ECNY’s Board of Directors in December 2017.